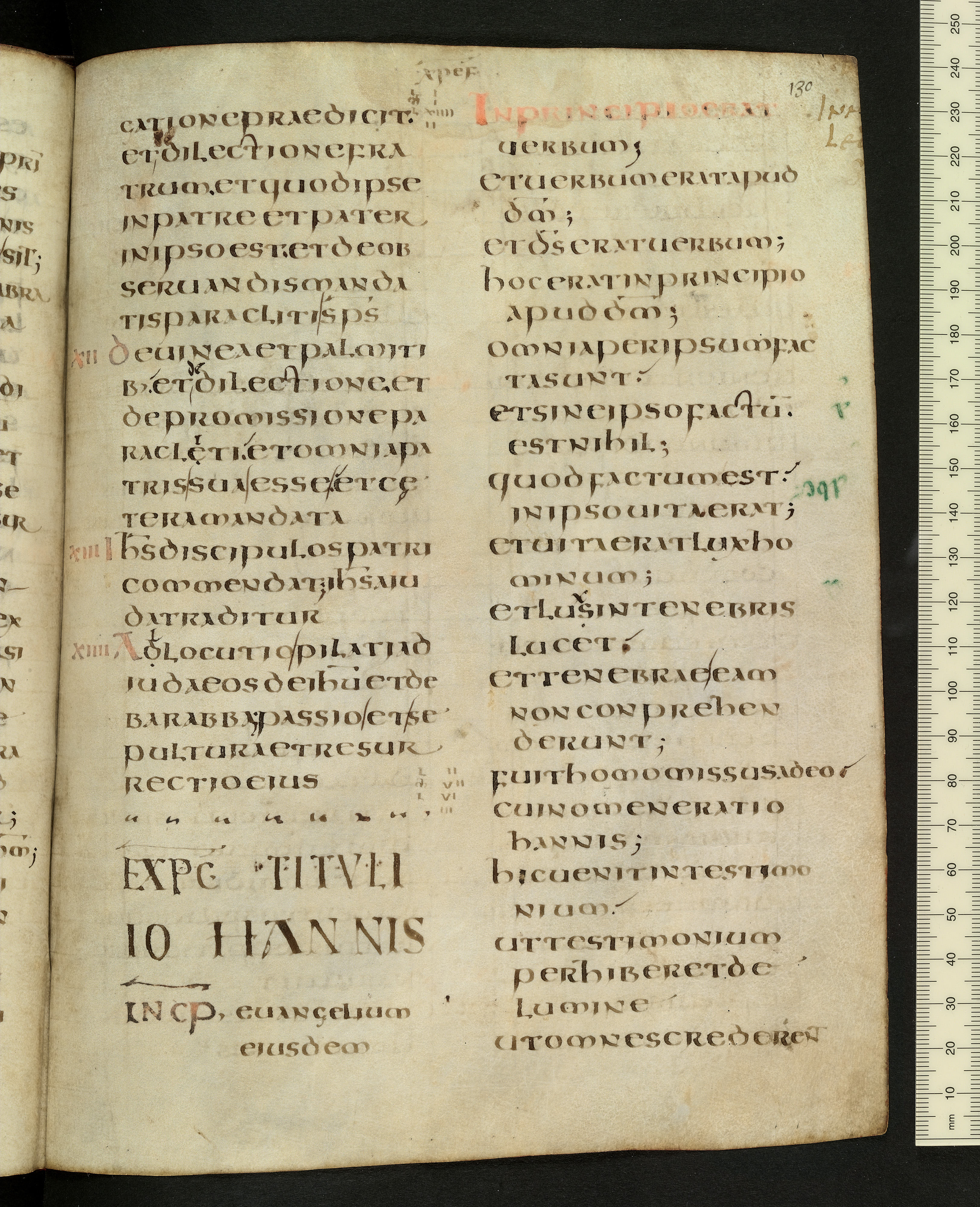 This Italian copy of the Gospels is notable for having been in England from a very early date. It was written around the year 600 and was in England by around 700. The text of the Gospels found in this manuscript is closely related to the text of major Insular Gospel books, including the Book of Durrow.

The script of this book is unusual for Italian Uncials of its period. The letterforms are calligraphically elaborated with curves and flourishes. The lobes of m are markedly round, with the left one curving all the way around to the center – typically a feature of later Uncials. The stem of d is made as a separate stroke from the rest of the letter – an unusual ductus for Uncial.

The Gospel text is laid out per cola et commata, with line breaks after each sense unit. The short clauses are also marked by punctuation, the punctus elevatus ´and the punctus versus ;. The text is written in scriptio continua – without any spaces between words, though in several places a later corrector has inserted slashes to show word breaks. (It is reasonable to assume that these slashes were entered by one of the early English users of the manuscript, since word separation was normal in England, but not in Italy, when this manuscript migrated north.)

The small annotations between the columns on this page mark the Eusebian canons and sections, an index to which passages are paralleled in more than one of the Gospels. In this case, the first two passages of John are paralleled in Mark and Luke, but not in Matthew. In the right margin, an early Italian corrector noted in a slanting script at which feast this passage is to be read, presumably In natale domini – on Christmas day – though the annotation has been partly trimmed off. There are further annotations and corrections throughout the manuscript by English hands of various periods.

1. The third letter in col. 1, line 2 shows the stem of d made as a separate stroke – not usually typical of the ductus of Uncial

3. Col. 1, line 3, first letter: The curved ends to the cross-stroke of T are typical of the decorative elaboration of letters in this hand.

5. Ms with very rounded lobes, closed by strokes that meet at the center of the letter, appear in commendat, col. 1, line 15. This is normally a late (8th-century) feature in Uncial, but here is part of the calligraphic, curly treatment of letters in this unusual hand.

6. At the top of the page between the two columns is the abbreviated inscription for Christe fave ("Christ protect" or "look favorably on" the work)

7. Immediately below the Christe fave inscription are Eusebian sections and canon numbers, indicating which passages in other gospels are parallel to this one. A second set of Eusebian numbers appears between the columns next to Fuit homo missus a deo, nine lines up from the bottom of col. 2.

8. In col. 2, lines 16, the dot under the s indicates that the s is a mistake, and the correct letter, x, has been entered above. 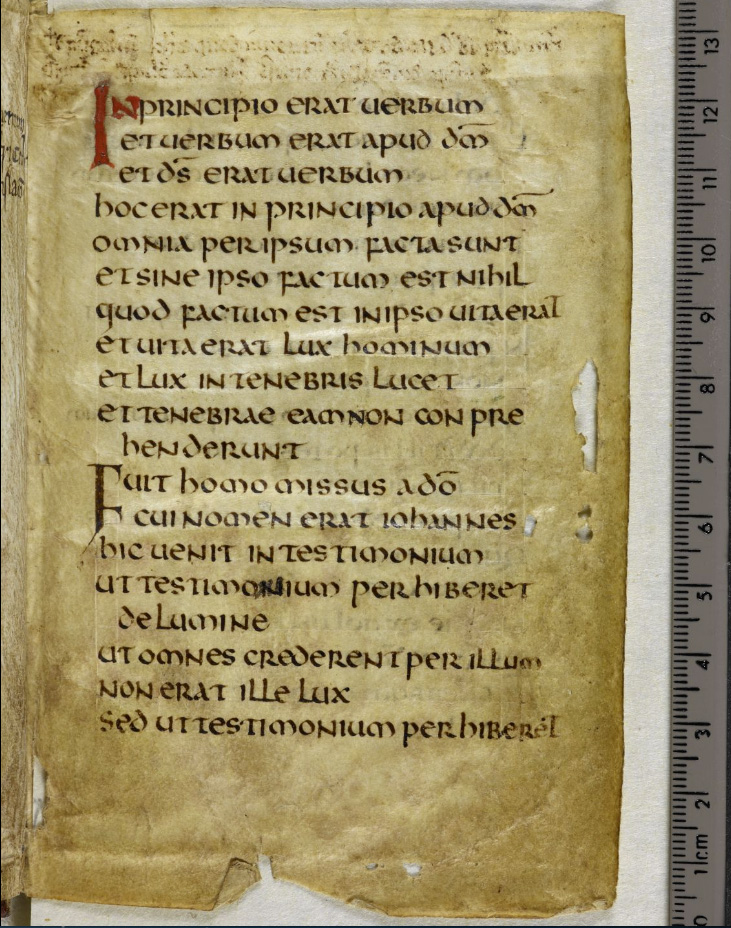 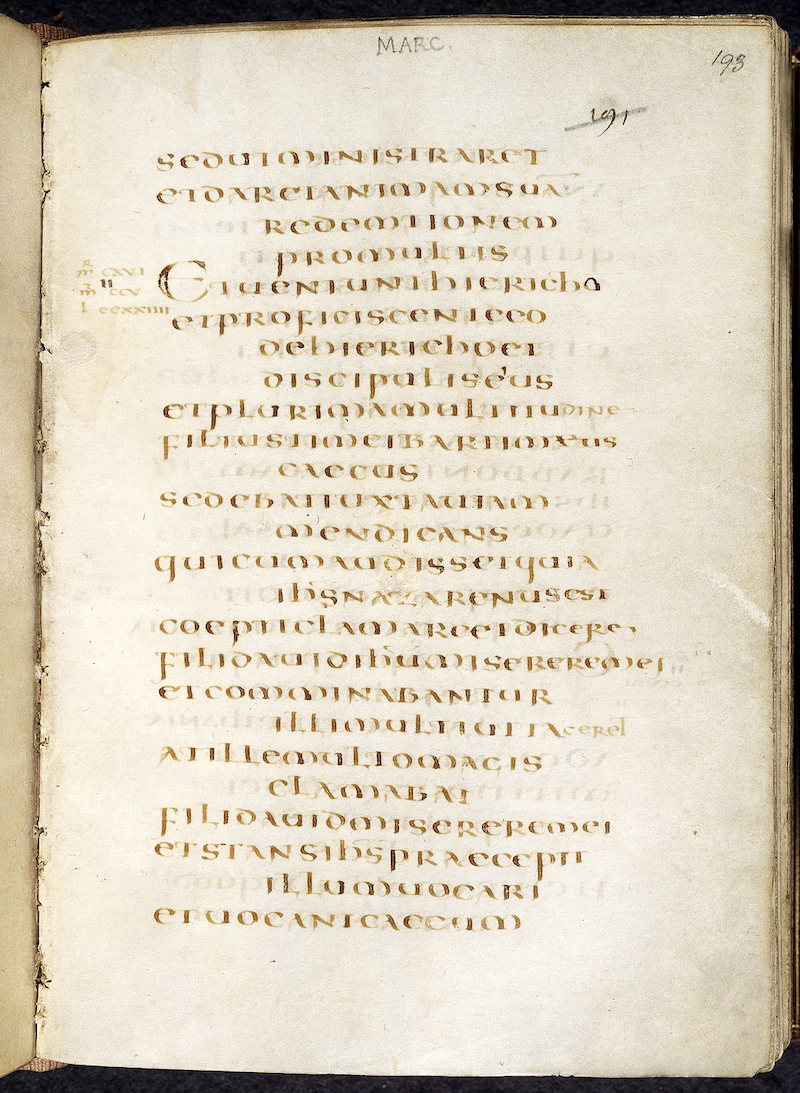 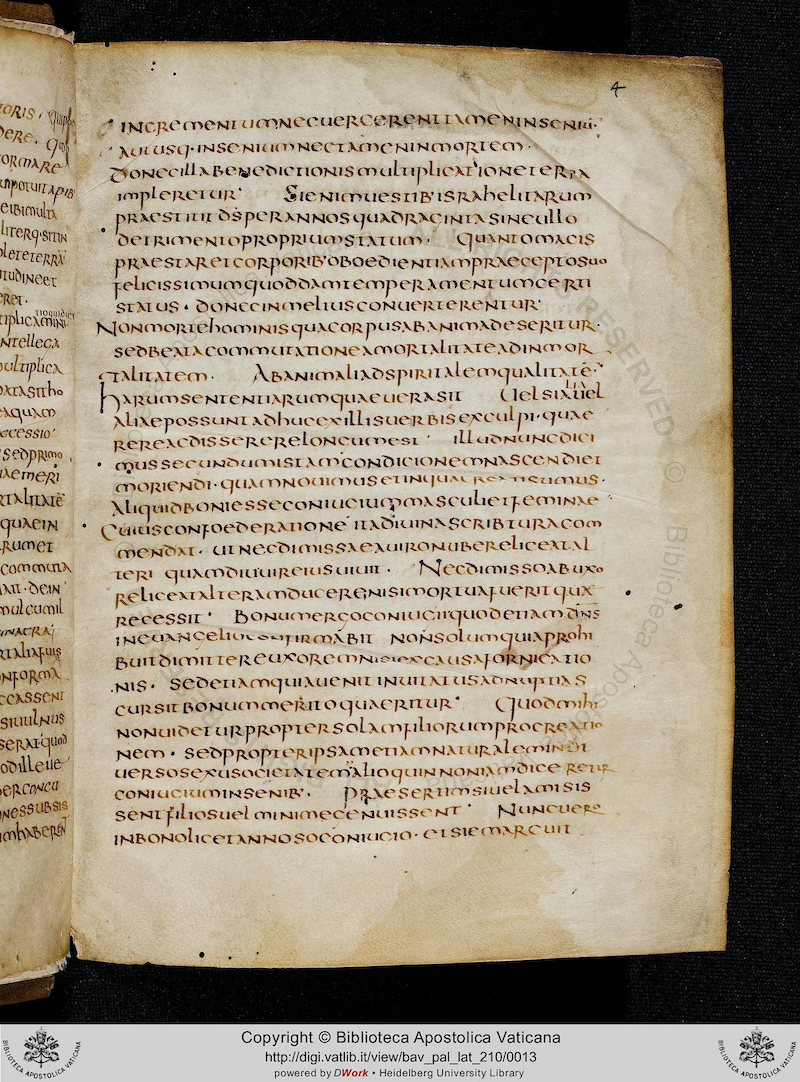